There have been some very sad and very powerful pieces published recently about miscarriage and stillbirth. In April, the Church Times included an article about the lack of any liturgy to mark pregnancy loss. Julia Bueno’s new book The Brink of Being: Talking about miscarriage (Virago Books, 2019) includes a chapter on funerals and memorials, entitled ‘Efforts to remember, pressures to forget’. Julia, who lost her own twins 22 weeks into her pregnancy, generously acknowledges me in the list of people who talked to her about the project. But to be honest, I didn’t have much to say that would help her; the reactions of women to the loss of a baby don’t feature in the ancient literature. For the early modern period, however, there’s more to say about the deaths of children at a very young age. But how should we read the evidence? This is mostly a blog about how, and how not, to do history, and it’s in that spirit that I’ve decided to reflect upon how I’ve responded to a couple of things I’ve seen recently.

Since (sort of) retiring (which I blog about here), I’ve had more opportunity to visit interesting places. On one day trip recently, we went to Hinton Ampner church, where I came across an inscription marking the burial vault in which lies Elizabeth Stewkeley, daughter of Sir Hugh and his wife Katherine (or Catherine). This little girl died on 24 September 1667, ‘being of the age of 37 weeks’. Her burial is recorded in the parish records on 26 September. Katherine herself survived until 21 October 1679. 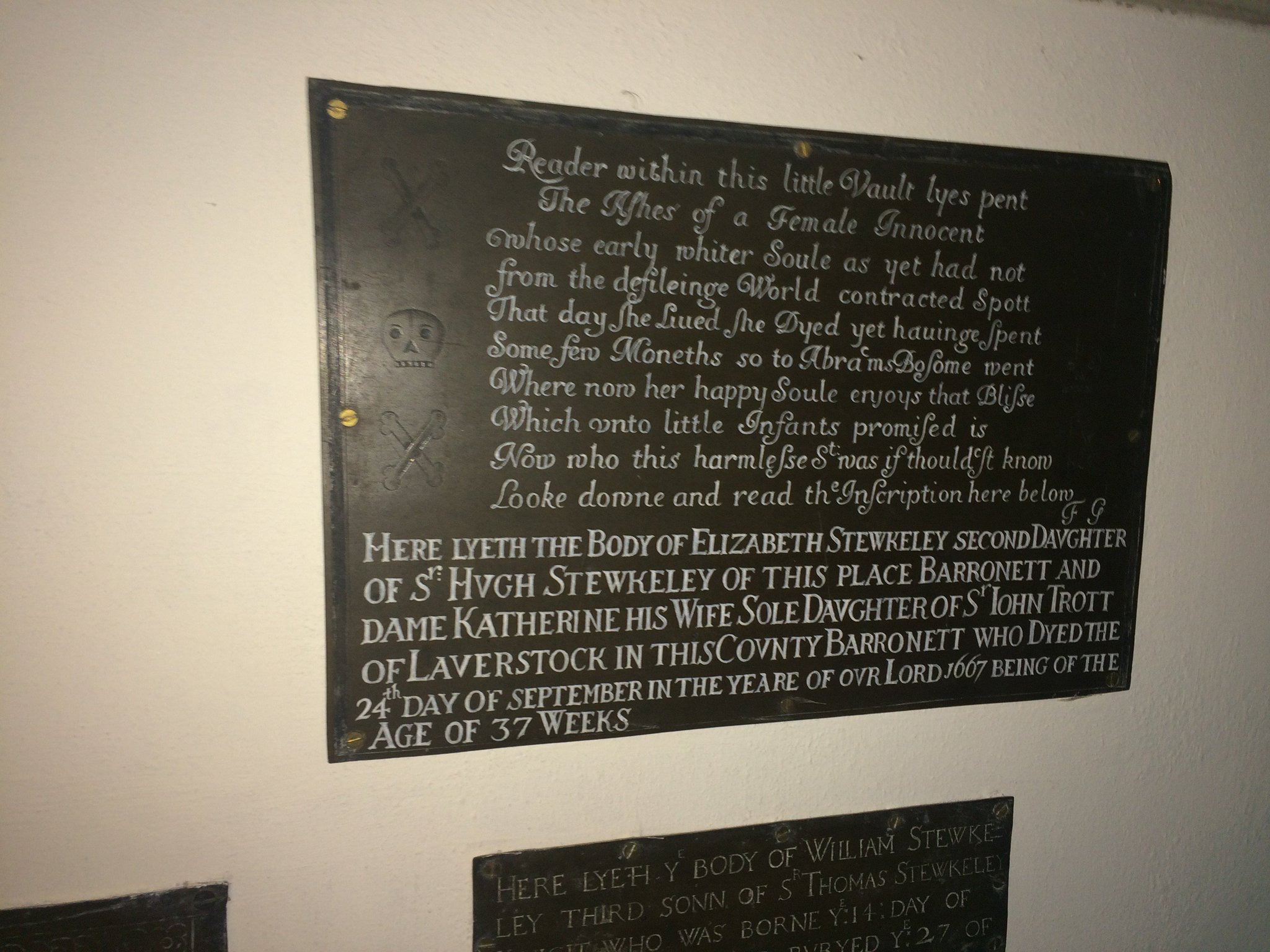 There are several conflicting comments on Elizabeth’s early death included in the poem. One, ‘That day she lived she died’, made me wonder if this was even a stillbirth, or a death immediately after birth. Taking that comment literally – she died on the same day as she was born – could then be supported by the comment that her ‘soul as yet had not from the defiling world contracted spot’; she was entirely without sin. That made me wonder, though, what happened to original sin here? Perhaps she was baptised, and then died very soon after that? But the very next words, ‘yet having spent some few months so to Abraham’s bosom went’, suggest a longer – although still short – life: which would fit with her stated age at death of 37 weeks. But again I wondered: what’s with counting her life in weeks? Is 37 weeks also considered the duration of pregnancy here? Or is that entirely a coincidence?

My first reaction was that I wanted this to be a child who died at birth, with the 37 weeks representing pregnancy. This would make it unique! But first reactions aren’t always correct, and here the evidence couldn’t be forced into supporting this hypothesis: it just doesn’t work with the ‘some few months’. And my initial reaction could well be influenced by my own reading about miscarriage and stillbirth. So, like you do, I asked on Twitter. One suggestion I was offered there was that the counting of Elizabeth’s short ‘life’ began not at conception but at quickening, the highly significant point where her mother felt her move, at which a woman could be (almost) sure of pregnancy and would announce it to the wider world. So I checked out when quickening was supposed to occur, for a female baby (yes, from the Hippocratic texts onwards, boys and girls ‘quicken’ at different times), in seventeenth-century ideas about pregnancy. The answer seems to be between 14 and 20 weeks. If we went with this idea, her ‘life’ would have been made up of 17 to 23 weeks more in the womb, plus 14 to 20 in the world.

I wasn’t convinced but, bearing in mind the date of Elizabeth’s death, I wondered if Jane Sharp’s The Midwives Book (1671) would have anything to say. There, in chapter 8 of Book IV, Sharp defines a miscarriage seven days after conception as only ‘an effluxion’, but ‘if in fourteen days after it is an untimely birth’. That suggests ‘birth’ is applied to any stage of the pregnancy other than the first two weeks; a long way from current terminology. This is supported, for example, by Lady Mary Carey’s poem ‘Upon ye Sight of my abortive Birth ye 31th: of December 1657’, quoted in an important article by Jean Wilson: the poem commemorates a miscarriage she suffered and describes how she drew on her faith to make sense of it. This meant blaming her own lack of spiritual ‘fruit’ for this ‘dead fruit’. It is part of the ‘rod of God’ theory of disease causation, mentioned in the poem, in which you should be grateful for sickness (or miscarriage) because at least it shows that God is still trying to whip you into shape rather than giving up on your redemption. No, I know that makes very little sense to us today. The past is indeed another country.

I’m lucky enough to know directly a lot of people working on this historical period who focus on death and memorials, and it was one of them – Ralph Houlbrooke, a former colleague from Reading – who directed me to Jean Wilson’s work. I located this by going online and finding that it was cheaper to buy a copy of the journal issue in which it appeared than travelling to a library to read it! After crowd-sourcing on Twitter, my next stage was to ask various other contacts to help. Several of them had never come across a child’s life measured on a monument in weeks rather than either days, or months, although Ralph had uncovered some that did; for example, in St George’s Chapel, Windsor, William King (son of Oliver King, Bishop of Bath and Wells) ‘being soon weary of his abode on earth’ died in 1633 after ‘ten weeks pilgrimage’.

But another inscription to which Ralph drew my attention made me wonder again about those 37 weeks. Even if this was not a reference to stillbirth, could it have been a conscious matching of the time in the womb to the duration of Elizabeth’s short life? This matching – feeling to me like a desperate attempt to find a pattern in an otherwise meaningless event – happened on the memorial to Arthur Wharton in St Paul’s, Wooburn, Bucks. Arthur died in 1642 and:

Nine months wrought me in the womb

Nine more brought me to this tomb.

Jean Wilson’s article included a memorial from Madingley, Cambridgeshire, for a child who definitely died on the day of her birth; she is unnamed but, by a bizarre coincidence, this may have been another Elizabeth Stewkley (spelling just one letter different, and we all know how fluid early modern spelling is), a child who died in September 1636.  Translated from the Latin, the inscription reads that ‘a single day saw [her] born, destroyed and anon made brighter than daylight itself’ … ‘almost in the very hour of her birth, [she] breathed back her soul to God’. Wilson thinks this child ‘may well not have been baptised’, thus raising the important question of what happens to the souls of the unbaptised. Possibly, assertions of being ‘made brighter than daylight itself’ are made precisely to claim that the child is nevertheless in heaven.

Back to the Hinton Ampner memorial. Another person who helped me with her advice was Anne Laurence, a former colleague from The Open University. She pointed out that the lack of punctuation is a problem in deciding the meaning on that inscription but supported the suggestion that the reason why Elizabeth’s soul ‘as yet had not from the defiling world contracted spot’ would be her baptism. However, I couldn’t find the baptism records of this church online. If I were working on this story for professional reasons rather than for my own interest, clearly I’d need to visit the relevant Record Office, but I’m not, so I haven’t. Elizabeth’s burial does appear in the records online, on 26 September, two days after her death. As Ralph pointed out to me, however, if there is indeed no record of her baptism, this could be because the baptism was a private one; in such a case, it should have been registered, but perhaps was not. Another lesson, then: the records are not definitive evidence.

Then, on a visit to a church much nearer to my home – St Peter, Little Wittenham – I found another relevant inscription commemorating Anne Dunch, infant daughter of Henry and Anne Dunch, born 13 November 1682, who died 29 August 1683.

The first half reads:

Behold an innocent without spot

Other than from its parents got

Let none these little ones despise

Since they’re so precious in Christ’s eyes.

Taken with the ‘spot’ reference in the Hinton Ampner inscription, would that suggest that Elizabeth had been baptised – nothing contracted from the world – whereas Anne was still carrying original sin (‘from its parents got’)? But a quick look at the online records for Little Wittenham shows that Anne was baptised in 1682, so it’s not as simple as that. Maybe one lesson here is not to read too much into the wording of a public inscription.

The second half of Anne’s inscription is:

to become innocent as they

Heavens only promised to such as these.

Again, as with the Hinton Ampner memorial, there’s that absence-of-punctuation issue. The third line here initially confused me; I’m now assuming it should be ‘the old man cannot [be sufficiently innocent to please God]: it is the new babe [who] must please [God]’. But how about the ‘guilty parents’? Is this just a general statement (but if they’ve been baptised, haven’t they had original sin wiped off the record?) or is it specific – did they do something wrong?

So where does this get us? In terms of ‘Efforts to remember, pressures to forget’, we can see some very serious attempts to remember, and also to assert that the child who has been lost is now in a far better place. We can learn something about the value of asking the experts – in particular, the striking feature of counting a life in weeks is not unique to the Hinton Ampner memorial. We can understand how our categories don’t always fit those of our ancestors. And we can see the need for caution in reading too much into a single monument put up by one family in a time of sorrow.

Things I read along the way:

4 thoughts on “The histories of miscarriage and stillbirth”