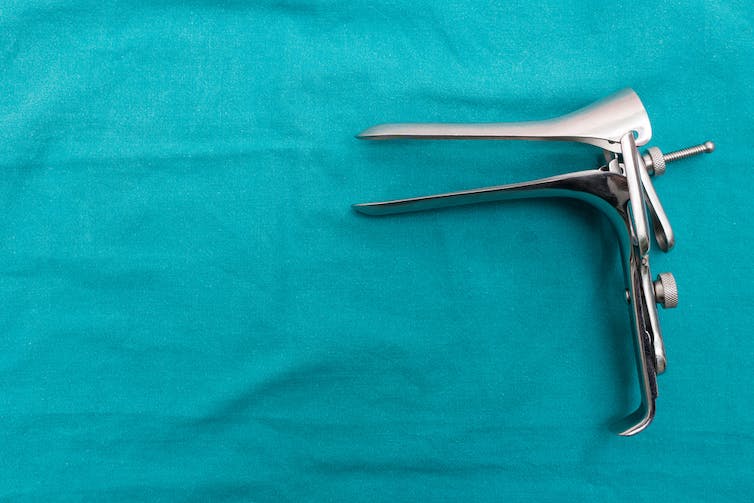 The old-style speculum – soon to be replaced. Bangkoker/Shutterstock

The vaginal speculum – that creepy looking metal device used to examine the vagina and cervix – has remained largely unchanged since the 19th century. But a team of female designers in San Francisco is looking to give the unfriendly implement a new design.

In an interview with Wired, the designers described the hazards of the current one as the noise, the temperature and the feeling inside. Their prototype, by contrast, is made of three leaves that open silently. And it’s covered in silicone – a warmer material than steel.

James Marion Sims, the controversial “father of gynaecology”, is credited with inventing the modern speculum in the mid-19th century. However, the type with two or more metal blades and a screw mechanism that opens them so that the vaginal walls are forced apart, goes back at least to the Roman Empire. Resistance to using these implements also has a long history.

There was some unease in the ancient world about using any instruments to see inside the body. The ancient doctor was supposed to rely on all his senses, not enhance them. An ancient Greek description of haemorrhoids made the point that an instrument could flatten a lump and obscure the very problem the doctor was supposed to be seeing for himself.

The ethics of inserting an instrument into the vagina made the speculum even more controversial. In Sims’ own time, the English regarded the speculum as French and thought it risked “dulling the edge of virgin modesty, and the degradation of pure minds, of the daughters of England”, as the English physiologist, Marshall Hall, phrased it in 1850.

Medical instruments used in ancient times are difficult to understand, as surgeon John Stewart Milne makes clear in Surgical instruments in Greek and Roman times. Ancient medical writers named and described various instruments, but it isn’t easy to match the texts to the objects that archaeologists find.

Many such objects look a lot like something we have today, so we assume they were used in the same way. But things weren’t so simple. A tool to examine the rectum or vagina could also be used to hold open a wound while a foreign body was extracted.

Sims’ speculum was based on bending a metal spoon, and one of the items almost always found in sets of medical instruments from ancient Rome is a spoon. Sometimes it has a probe or hook at the other end.

The ancient Greek rectal dilator (“katopter”) may originally have been two spoons, one held in each hand. A more specialised tool for looking into the rectum was the small dioptrion. We assume this is the two-bladed instrument where you compress the handles to open the blades. Many of these have been found.

They were possibly also used for gynaecological examination. In the third century AD, Leonidas of Alexandria wrote that you use them to open up the rectum “as we do the female vagina”. It isn’t clear here whether he means the same instrument was used, or just the same method.

The large dioptrion used for the vagina looked very different. Like the modern speculum, it had a screw mechanism to open up between two and four valves: this one has three.

Ancient medical writers were perhaps more sensitive to their women patients than we’d expect. They had different sizes of instrument depending on the age of the patient. The set of medical instruments found in the Casa del Medico Nuovo in Pompeii includes a uterine speculum but also a small dioptrion.

Medical texts recommend using a probe to check the length of the vagina before deciding which size to use. Muscio, the supposed author of the Genecia, a treatise on gynaecology based on the work of Soranus and dating to around 500AD, says they put oil on a speculum first and warmed it up before insertion.

The obstetric forceps developed by William Smellie in 1748 were of wood rather than metal, so that they would “appear less terrible to the Women … make no clinking noise when used”. Because the wood could easily break, Smellie then tried steel forceps with the blades covered in leather, but these soaked up fluids and smelled bad. We now know that they would spread infection.

The metallic noises and the coldness of the speculum and other devices used in gynaecology have long been a problem. But there were attempts to reduce the unpleasantness. It’s not clear how much these attempts were about the need to attract patients, and, certainly, not all innovations were in women’s interests. But a new speculum, designed by women for women, is a refreshing break with the past.

This article was originally published on The Conversation. Read the original article.

1 thought on “The speculum finally gets redesigned – by women”