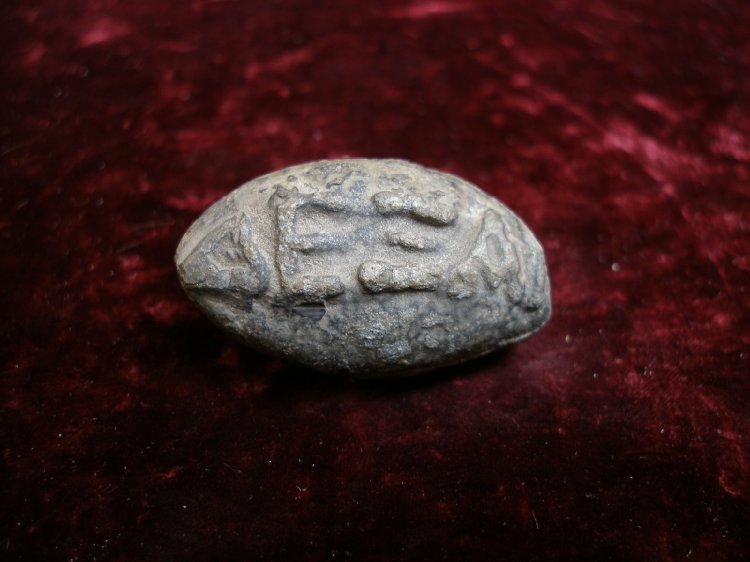 A few years ago, I saw images of an object that was new to me twice, in as many days. It was this pictured lead sling-shot from the fourth century BC, found in Athens and now in the collections of the British Museum (object reference no. 1851,0507.11). The first time the image was circulated on social media; I glanced at it but didn’t have time to think about it properly. The second time was at a conference on health in the ancient world, held at the University of Gothenburg, when one of the speakers, Professor Julie Laskaris, showed this same image as part of her keynote lecture on military medicine. The word on it is DEXAI, Greek for ‘Catch’!

I’m interested in what this suggests about literacy in ancient armies – the use of words on weapons could imply that the recipient is supposed to get the message, or at least that one’s fellow soldiers will be amused and encouraged by it before it is sent. Does it have some sort of power to make the slingshot more effective? Here, I think of Galen’s comments on amulets with words and/or images on them – namely, that the power resides in the material from which the amulet is made, not in what is written on it.

I went back to the social media reference to find out more. It turns out that a whole range of things could be written on slingshots. You could write the name of your general, or of a god. Or you could add something that would help your missile find its target: ‘Strike!’ or ‘Don’t miss!’ But other messages were far more jokey. One translates as ‘Here’s a sugar-plum for you!’

Thanks to the wonders of digitisation, we can all read the article in the Canadian Journal for 1864 in which the Revd John McCaul described the ancient inscribed slingshots that had been shown at various antiquarian societies’ meetings. Revd McCaul was a Church of Ireland minister who was then called to Canada as a college principal. A keen antiquarian himself, with another publication on Romano-British inscriptions, he was not so keen as modern commentators are to discuss the inscriptions he calls simply ‘very coarse’. When Octavian’s army besieged Perugia in 40/41 AD, with Mark Antony’s wife and brother in the city, both sides wrote on the shot they used. One particularly choice example from Octavian’s army reads ‘Lucius Antonius the bald, and Fulvia, open up your arse’ (L[uci] A[ntoni] calve, Fulvia, culum pan[dite]). From the other side, one simply states ‘Seeking Octavian’s arse****’.

Coarse, indeed. But perhaps not unique to the ancient world. Bomb messages were used during the first Gulf War. My former Open University colleague Emma Bridges, now at the Institute of Classical Studies, whose current research project is on ancient military wives and is a former military wife herself, has seen pictures of bombs to be dropped by fighter jets during the second Gulf War carrying graffiti saying things like ‘Don’t bother using lube’. In Canada, Revd McCaul was known for ‘his skill at finding apt quotations from the Greek and Roman classics’. However, I suspect none of these quotations would have been taken from the world of the slingshot!

I blog on a range of subjects arising from various aspects of my life. On https://theretiringacademic.wordpress.com, I focus on my reactions to early retirement and think about aspects of teaching and research which I hope will be stimulating to those still working in higher education. On https://shared-conversations.com, I blog as an authorized lay preacher in a pretty standard parish church of the Church of England, who needs to write in order to find out what she thinks. I took part in the Oxford/St Albans/Armed Forces C of E 'Shared Conversations' in March 2016, worked on the Living in Love and Faith resources from 2017 and was elected to General Synod in October 2021, and continue to try to reflect on some of the issues. On https://mistakinghistories.wordpress.com I share my thoughts on various aspects of the history of medicine and the body. I also write for The Conversation UK on https://theconversation.com/profiles/helen-king-94923/articles View all posts by fluff35

1 thought on “Catch! Attacking your enemy with words as well as weapons”